Welcome to the Danger Zone – Audiowalk against racist Police violence

Since Corona, things have been quiet on St. Pauli. The countless police patrols have remained. Every weekend thousands of tourists have come to the so-called “red light district” and will continue to do so in the future: The prestige of the district is one of the most important figureheads of Hamburg’s city marketing.

In contradiction to this, the district is repeatedly constructed as dangerous by politics and the media. For example, St. Pauli has been considered a so-called “dangerous place” since 2016, after the “danger zones” were abolished. A practice that grants extraordinary powers to police forces and a specially established task force and legitimises checks on people and searches without initial suspicion.

In recent years, the racist structure of the concept of “dangerous places” and its practical implementation has become visible again and again: Black people and People of Colour are particularly affected by the measures, and their racist criminalisation and stigmatisation is thus advanced. This situation is exacerbated by the expanded powers of the police to contain the corona pandemic.

In this audio walk, perspectives on the neighbourhood are shown by people who live, work and engage in the district. And those who are affected by the racist practices of the police. And so we ask the questions anew, what makes a place dangerous, from whom danger emanates and who is affected by it. People speak who belong to St. Pauli but are often made invisible: people affected by racist criminalisation, refugees and illegalised people, activists, initiatives and residents of the neighbourhood. 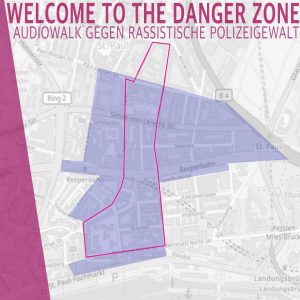